Post-Pam: lessons learned for [German] development cooperation in Vanuatu and the Pacific A study commissioned by the Global Programme on Risk Assessment and Management for Adaptation to Climate Change

Tropical Cyclone (TC) Pam was one of the worst
natural disasters in the history of Vanuatu. The
country suffered loss and damage to an extent
that vastly overwhelmed its own capacities. A
strong El Niño, in the months following the cyclone, acted
as additional multiplier for existing development problems,
especially with regard to water and food security
in rural areas. In many ways, the cyclone and its impacts
reflect political, conceptual and operational challenges
that lie at the heart of the current debate on loss and
damage (L&D) and clearly illustrate the need for comprehensive
climate risk management (CRM).
TC Pam has been recognised as an opportunity to learn
lessons and draw up recommendations for [German]
development cooperation (DC) and its partners in the
region on how to address the issue of comprehensive
climate risk management, including climate risk insurance.
The objectives of this study were to identify those
lessons in order to inform Germany’s current and future
regional cooperation in Vanuatu and the South Pacific
region.
This report gives an overview and socio-economic
characteristics, disaster risk and CRM institutions and
programmes in Vanuatu and the region and provides
background on activities of German development cooperation.
It further presents the main findings on lessons
learned from the response and recovery phase based
on a review of available documentation and a mission to
Vanuatu in October 2015. The last chapter details recommendations
developed by the mission team.
Climate change represents one of the greatest challenges
facing the South Pacific region. In response to these
challenges, the Pacific is the first region in the world that
integrates climate change and disaster risk management
into a single overarching regional strategy. A number of
multilateral and bilateral cooperation projects have been
agreed to support the region in these efforts, including
the Pacific Catastrophe Risk Assessment and Financing
Initiative (PCRAFI).
Germany has been supporting Pacific island countries
through development cooperation for nearly forty years.
Increasingly, GDC is taking systematic account of climate
change-related effects as well as countermeasures. The
Coping with Climate Change in the Pacific Island Region
(CCCPIR) programme aims to advance adaptation to
climate change in various sectors in 15 countries. During
its G7 Presidency, the German Government promoted
InsuResilience, an initiative on climate risk insurance.
TC Pam struck Vanuatu on the evening of 13 March 2015.
While 11 people were killed during the storm, it is likely
that much greater loss of life was prevented by the high
level of community preparedness, timely and accurate
warnings and community responsiveness. According to
the Post-Disaster Needs Assessment (PDNA), TC Pam had
an impact equivalent to 64.1% of gross domestic product.
The Government of Vanuatu appealed for international
support to respond to the crisis. The GoV relied mainly on
a post-disaster financing mechanism, with donor assistance
representing the most important source of funding.
In spite of enormous logistical constraints, the initial
response phase saw significant achievements.
POS T-PAM: L E S SONS L E A RNE D FOR [GERMAN] D E V E LOPMENT COOP ER AT ION I N VANUAT U AND THE PAC I F IC 5
The current situation in Vanuatu shows how two consecutive
extreme climate events can lead to a severe crisis in
a society previously considered quite resilient. Although
the affected population immediately embarked on
self-recovery, applying the ‘build back better’ principle
is still a challenge. Looking beyond the current crisis, it
has furthermore become apparent that a comprehensive
approach to DRM and CRM requires strengthening. On
the other hand, integration and mainstreaming is making
promising progress, and Vanuatu is leading a regional shift
in the way it integrates climate change and disaster risk
reduction governance and implementation.
The events surrounding TC Pam confirmed that Vanuatu
is generally very well prepared for cyclones. However,
with the vast majority of houses suffering damage, they
also revealed the island’s limited capacity to mitigate the
impacts of cyclones. While response activities were quick
and effective, it became obvious that the scale of the
international response overwhelmed national capacities
to absorb such assistance. A number of recommendations
therefore emerge on how to improve coordination and
communication, and to ultimately ensure the sovereignty
of the GoV in such emergencies.
Future challenges are centred on two pillars. For each of
these pillars, this study identifies more specific fields of
activity that will strengthen capacities in Vanuatu and
the region to further reduce climate risks and better
cope with loss and damage. The first pillar involves more
comprehensive assessment of immediate and longterm
climate risks at local, national and regional level
in order to further reduce climate-related risks. Fields
of activity include support for further risk assessments
and the ongoing DRM decentralisation process, further
integration of disaster risk reduction (DRR) and climate
change adaptation (CCA), mainstreaming into economic
and sectoral planning, and the integration of early
warning processes, especially downstream.
The second pillar concerns financial resources for
the implementation of CCA and DRR activities and
disaster financing. Given Vanuatu’s particular circumstances,
support should be directed to Vanuatu’s National
Implementing Entities accreditation roadmap and to the
establishment of both a national trust fund for climate
change and disaster risk reduction and a small grants
scheme. DC can also assist in strengthening financial
management and governance. In terms of disaster financing,
DC should explore options for climate change and
disaster risk-sharing schemes. 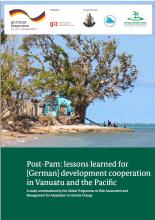