Torba thanks donors, Government,contractor and stakeholders

Below is the text as contained in the Vanuatu Daily Post News article attached.

President for Torba Province, Erick Shedrack says the province recognizes and acknowledges every assistance towards the construction and establishment of the new National Disaster Management Office (NDMO) in Torba.

Mr. Shedrack made the remarks during the opening of the new disaster building last Friday.

He said everyone cannot deny the fact that disaster has no respect for anyone.

Shedrack urged the minister to make sure the new building has all the facilities with necessary equipment and human resources required to provide essential service as intended to the people of Torba.

He said the Torba islanders will now no longer rely on the main office in Port Vila because they have a facility that will respond faster to the demands of the people of the province.

The new facility will service the people of Torba Province from Mere lava in the Banks group to Hiu in Torres Islands.

The Loli Construction Company completed the building within three months but the initial opening took more time before it was opened last week.

The building has two new water tanks, which are already providing rain water to the government workers serving at the Torba Provincial Headquarter on Sola.

Core Task Team leader for the Project, Tevi Obed says every three years the World Bank avails funds for the Vanuatu Government and Vanuatu gets around Vt3 billion.

This particular project was funded under a grant by the European Union, through the World Bank.

Secretary General for Torba Province, Ketty Napwatt, says it was their longtime wish to see the opening of the building after completion. 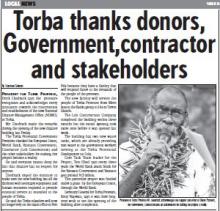