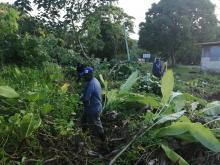 The Department of Youth and Sport branch Office in Torba endorsed a clean-up campaign activity on May 6th to May 7th to help combat the Malaria outbreak after TC Harold.

Officer in Charge of the Department of Youth and Sport branch office in Torba, Mr John Alick was the key person behind the clean-up campaign.

The Provincial Disaster Officer for Torba Province, Betsy Manliwos stated that the number of confirmed malaria case has increased to 10 cases especially around Sola provincial headquarters on the island of Vanualava.

“The clean-up was successful and the main theme of the event was ‘Together we Eliminate Malaria in Torba Province’” she said.

Ms Manliwos stated that the Provincial Emergency Operation Center (PEOC) for Torba province has supported the clean-up campaign with all the asset used during the operation and the machines that were provided by the Public Works Department in the province.

“Since the activity took place during the State of Emergency, the PEOC recognizes the importance of stopping the spread of malaria because it is the institution that is coordinating the issue inside the operation run by all heads of inter-clusters such as Health inside the EOC,” she said.

The clean-up campaign engaged mostly youth and people within communities around Sola town and Vanualava.

The PEOC wishes to acknowledge the Torba Provincial Government, Health Authorities, Department of Youth and Sports, youth and the public for recognition and implementation of the clean-up activity to eliminate Malaria in the Torba Province especially after TC Harold.