NDMO continues to address needs of over 18,000 displaced population 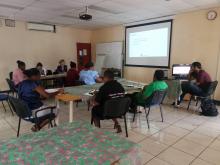 The National Disaster Management Office (NDMO) has organised a meeting with the Evacuation Centre working group, co-led by the International Organization for Migration (IOM), to help address the needs of the displaced population around the country during these disaster times.

The Senior Disaster Risk Reduction (DRR) Officer at NDMO Alice Iarem facilitated this meeting with the aim to assist NDMO with relevant data to inform planning for a detailed Displacement Tracking Matrix (DTM) currently managed by NDMO and IOM.

The purpose of this meeting is to organise with partners working on the ground to better coordinate the exact figures of the displaced population in each area to support NDMO planning on addressing displacement issues still faced in the affected communities.

“Obtaining updates from partners for displacement figures such as who is working where, what they are doing to make sure we get the right number of households, how many people and location from which province, island and Area Councils and which village,” she said.

Based on feedback from partners the islands that will be prioritised for the DTM are Santo, Malo, Aore, Pentecost, Ambrym and Malekula.

Alice stated that this is what NDMO want to achieve under the Evacuations Centre Working Group priorities which was established by NDMO after TC Pam in 2015.

There are a total of 272 evacuation centres that currently housed over 18,000 displaced population in all three provinces. According to figures from partners and the rapid technical assessment report, the active evacuation centres per province are Malampa 46, Penama 62 and Sanma with 164.

Logistics Cluster coordinated by NDMO confirmed assistance has been provided to most sites such as tarpaulins for immediate shelter needs as part of the immediate response efforts by NDMO and the distribution is still on-going.

With this activity, NDMO on behalf of the national government is continuing to coordinate with its partners to further address the needs of all displaced population during this response phase.