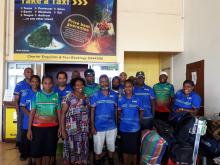 Following Tropical Cyclone (TC) Harold and its devastating impacts left on some provinces in Vanuatu, the SHFEA Provincial Emergency Operation Center (PEOC) had deployed a team to conduct the Rapid Technical Assessment (RTA) around SHEFA Province.

The team left early this week with representation of different government ministries and departments who will assist with the technical assessments for the next few days.

The aim of this assessment is to assess the scale of the damage caused by TC Harold and the needs of the affected population.

Shefa province is considered less affected according to the aerial survey done just after TC Harold passed and this assessment is very important to verify the real damage and the need on the ground to assist with response.

SHEFA provincial disaster Officer, Eddy Maliliu has confirmed that the team will be mainly targeting Epi, Tongoa, Shepherds outer islands and Efate offshore islands. With the vast experience the team brings, they will also be conducting awareness on COVID-19 and other sectors’ key messages.

Mr. Maliliu added that Shefa PEOC has received some initial assessments, which stated that water and food are some key areas to look into during the assessment.

Similar assessments for the highly affected provinces of Penama, Sanma and Malampa have now been completed while this week Shefa and Torba are starting this week.

Mr. Maliliu is asking all Area Administrators and communities within Shefa Province to work closely with the team while on the ground to conduct assessment in the next few days.