Vanuatu has Ratified the Paris Agreement 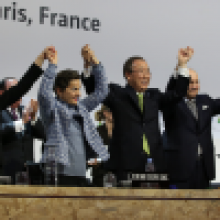 In total, 31 countries deposited their instruments of ratification, acceptance, approval or accession to the Agreement. Added to the 29 Parties that had already joined, these 60 Parties account for 47.76% of global greenhouse gas (GHG) emissions. Having surpassed the first threshold for entry into force (55 Parties), the Agreement only needs enough new ratifications to account for an additional 7.24% of global GHG emissions in order to enter into force.

UN Secretary-General Ban Ki-moon hosted the event to encourage countries to formally join the Paris Agreement and promote its entry into force this year.

The Agreement will enter into force on the 30th day after the date on which at least 55 Parties to the UNFCCC representing at least 55% of global GHG emissions have deposited their instruments of ratification, acceptance, approval or accession.

The Agreement, which garnered the most signatures of any international agreement on its first day open for signatures (22 April 2016), now has 185 signatories. This total includes the signatures of Armenia, Chile, Malawi and Zambia, who signed on 20 September.

At the high-level event, Ban thanked the countries that had already ratified, including 15 on 22 April, for their leadership. He then formally recognized those countries that had ratified the Agreement after 22 April but before the 21 September ceremony.

After Ban received instruments from 31 countries, attendees heard, via video message, commitments from Australia, Austria, Bulgaria, Cambodia, Canada, Costa Rica, Côte D'Ivoire, France, Germany, New Zealand and the Republic of Korea that they would join the Agreement by the end of 2016. The EU also expressed determination to ensure all EU member States had completed their domestic processes so that the bloc can also join as a Party this year.

Ban announced that with these 12 commitments the 55% threshold would be surpassed. He expressed his confidence that the Agreement would enter into force before he leaves office at the end of the year, saying that this would usher in a new era of international cooperation on building a safer and more resilient world, help protect the poor and most vulnerable to increased climate impacts, and send a strong signal to the private sector that the future belongs to those who invest in low-carbon development.

Addressing attendees, Frank Bainimarama, Prime Minister of Fiji, noted his was the first country to ratify the Agreement, stressing that the rapid entry into force and implementation of Paris Agreement is critical to the survival of his country and other small island developing States (SIDS). He thanked Ban for his unflagging commitment to addressing climate change and for elevating it on the global agenda.

Under the Paris Agreement, Parties will make nationally determined contributions (NDCs) outlining their climate change targets. Each successive NDC is expected to be at least as ambitious as the Party's previous one. Through these national pledges, Parties aim to hold the increase in global average temperature to well below 2°C above pre-industrial levels and to pursue efforts to limit the temperature increase to 1.5°C. The Paris Agreement is also expected to contribute to the 2030 Agenda for Sustainable Development, especially Sustainable Development Goal (SDG) 13 (Take urgent action to combat climate change and its impacts).

The Vanuatu Paris Agreement Ratification Act No 9 of 2016 is available in the COP 22 Delegation Folder.