Vanuatu’s Year 11 secondary school students have demonstrated their climate change expertise in Vanuatu’s
first national Climate Zone Championship competition. In 2012, a pilot competition worked with only a handful
of schools, but this year’s 2013 Climate Zone competition was open to every secondary school in every
province of Vanuatu!
Vanuatu Climate Zone is organized by the Vanuatu Ministry of Education, USP Vanuatu and SPC-GIZ Climate
Change and seeks to showcase the learning and knowledge of Vanuatu’s students on the topic of climate change
in Vanuatu. Each secondary school in Vanuatu was invited to selected four year 11 students for the school team
in the competition. The process for the 2013 competition included two phases, a written exam and a live
competition. Local Vanuatu climate change experts provided background information on climate change
science, impacts, mitigation, adaptation, and special topics (e.g. gender) to all year 11 secondary schools (both
English and French language schools). School students were then given 2 months to study the information. On
19 September 2013, all student teams took a written ‘exam’ (in English or French), at official exam centres in
each province.
The highest-scoring school from each province was then invited to take part in the final competition in Port
Vila. TORBA province winner was Arep Junior Secondary School in Vanua Lava, SANMA province winner
was St. Michel on Santo, PENAMA province winner was St. Patrick College on Ambae, MALAMPA province
winner was Rensarie College on Malekula, SHEFA province winner was Malapoa College on Efate, and
TAFEA province winner was Lenakel Presbyterian College on Tanna.
From 4-8 November 2013, all winning teams participated in a series of live matches against other provinces as
an activity under the Vanuatu National Climate Change Symposium organized by the Ministry of Climate
Change. Students were asked climate change questions by two ni-Vanuatu climate experts in multiple choice,
true false, short answer and discussion-based formats. A panel of distinguished judges assigned points to the
answers.
The two schools with the highest point score after 15 grueling matches, and making it into the final competition
on 8 November, were Lenakel Presbyterian College (TAFEA) and Malapoa College (SHEFA). These two teams
battled it out for nearly two hours with the score neck-and-neck for most of the game. The studio audience kept
the excitement strong, and supporting their students and team! The end of the match saw the judges awarding
the 2013 championship prize of the 2013 Vanuatu Climate Zone to Malapoa College representing SHEFA
province, which took home a prize of 30,000vatu. All participating schools from every province were winners
and awarded a climate change water tank donated by the Chinese Women’s Association.
Thanks are due to the many financial sponsors for the 2013 Climate Zone including the SPC-GIZ Climate
Change Program, the USP-PACE EU GCCA Climate Change Program, the SPC-USAID Food Security
Program, the French Embassy Port Vila, the Chinese Women’s Association of Port Vila and technical sponsors
including Vanuatu’s National Advisory Board on Climate Change & Disaster Risk Reduction, the Vanuatu
Meteorology & Geohazards Department, the Ministry of Education, the Curriculum Development Unit, Vanuatu
Teacher’s College, VBTC and Television blong Vanuatu .
All Climate Zone 2013 matches were videotaped at the VBTC studios and will soon be rebroadcast to all
viewers in Vanuatu. Keep a look out to see just how knowledgeable Vanuatu’s students are about climate
change and test your own climate skills!
For more information on Vanuatu’s 2013 Climate Zone Competition, contact SPC-GIZ Climate Change at
VanuatuClimateChange@gmail.com Vanuatu Ministry of Education (jmelteres@vanuatu.gov.vu) or visit the
NAB online Portal www.nab.vu. 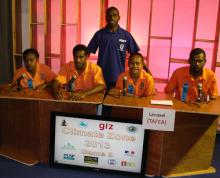