Networked Disaster Governance in Vanuatu: the Anatomy of an Inclusive and Integrated System to Build Resilience in a Small Island Developing State

The process of building resilience to hazards encounters complex challenges of gaps and overlaps among government and non-government stakeholders involved in decision-making for and practice of Disaster Risk Reduction, Climate Change Adaptation, Disaster Management and resilience-related Sustainable Development. Networked governance appears to be an appropriate system for the development of decision-making and decision-implementation to address the complexities of resilience-building in Small Island Developing States. The networked disaster governance system of Vanuatu served as a case study to analyse key factors affecting resiliencebuilding, such as high multi-hazard exposure, geographic and ideological distance between decision-makers and aid recipients, and the complexity of the coexistence of local, national, regional and international powers.

The use of both qualitative and quantitative methodologies – Earth System Governance framework, Social Network Analysis and Qualitative Comparative Analysis – identified governance structures supporting the development of resilience. An extensive literature review, data collection and analysis contributed to the development of a conceptual framework to assess the potential of a networked disaster governance system. This framework consists of four pillars: Government–non-government Networking, Cross-sectoral Networking, Networked Leadership and Networked Learning.

The Government–non-government and Cross-sectoral Networking pillars focused on the networking structures and processes that promote cooperative resilience-building.  Networking structures included the configuration of institutionalised networks while the networking processes included social networking between individuals, organisations and their networks. Thedevelopment of a complex set of networks patterned with paired formal and informal ties between the different stakeholders involved in resilience-building resulted in complementary governance configurations (flexible/stable, adaptive/reliable, fragmented/integrated, expertise building/comprehensive approach development).

The Networked Leadership pillar considered whether the legal and formal institutional structure supported shared decision-making and decision-implementation, and how influence was distributed across the system. Social Networking Analysis data and stakeholders’ perceptions were used to determine the influence of networks, which highlighted the main strengths of such a system, namely the recognition and promotion of inclusiveness of all levels, sectors and types of stakeholders in decision-making and decision-implementation, building an effective bottomup-top-down governance system.

The Networked Learning pillar examined the availability and appropriateness of tools to share disaster and climate change-related information across all stakeholders, and their capacities to process this information into sustainable knowledge and appropriate decisions at the individual, organisational and whole system levels. Networked Learning, facilitated by Government–nongovernment and Cross-sectoral Networking and Networked Leadership, enabled the development of a culture of preparedness, building the level of resilience of communities to climate change and disaster risks.

The occurrence of category five Cyclone Pam challenged the Vanuatu networked disaster governance system. Despite remaining weaknesses, its structure, leadership and processes developed in routine times showed significant potential to prepare communities and organisations for extreme events, and facilitate cooperation during emergencies. The analysis of the system in place in Vanuatu enhanced knowledge of the impact of networked governance to build a more credible, stable, inclusive, adaptive and capitalised system for more effective resilience-building in both routine and disaster times. More broadly, this thesis addressed the international and regional foci of Disaster Risk Reduction, Climate Change Adaptation and Sustainable Development by analysing how the concept of Networked Governance could support the current humanitarian goals of inclusiveness, integration, and consistency between science, policy and practice to build more effectively resilience to hazards. 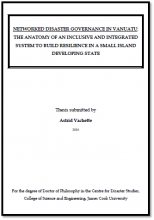