The Coping with Climate Change in the Pacific Island Region (CCCPIR) Program Programme aims to strengthen the capacities of regional organisations in the Pacific Islands region and its member states to adapt to climate change and mitigate its causes.  The programme in Vanuatu (which has been operational for 8 years) was structured in 3 components in 2016: (1) Mainstreaming climate considerations and adaptation strategies; (2) Implementing adaptation and mitigation measures; (3) Climate change and education. The Vanuatu interventions are part of a regional program that cooperates closely with a range of climate change initiatives by the Pacific Community (SPC), the Secretariat of the Pacific Regional Environment Programme (SPREP) the University of the South Pacific (USP) the Pacific Island Forum Secretariat (PIFS), the Melanesian Spearhead Group (MSG), the Australian Government, the United States Government and the European Union.

In 2016, the CCCPIR Program provided long-term technical advisors to the Ministry of Climate Change and the Ministry of Agriculture, who in turn supported a range of institutional strengthening and capacity transfer activities with the National Advisory Board on Climate Change & Disaster Risk Reduction (NAB), the Risk and Resilience Unit (RRU), and a range of other Government and Civil Society agencies.

The CCCPIR program strongly supported the preparation of the Vanuatu delegation to the UNFCCC’s 22nd Conference of the Parties in Morocco, including the training and capacity building of delegates, acquisition of travel finance, and drafting of negotiating positions and formal submissions.   Over 100 teachers in 6 provinces were trained in how to teach the new national curriculum, and specifically how to utilize CCCPIR-produced climate change teaching materials.

In local communities, the CCCPIR successfully supported the Department of Agriculture, Department of Livestock, Department of Cooperatives and SHEFA Province to implement 400 backyard gardens and poultry coupes in 22 villages on the highly vulnerable islands of Emau, Pele and Nguna.   A further 30 remote bungalows were supported to procure and install renewable energy systems for lighting and cooling.

With a total Vanuatu program budget of only ~44 million vatu in 2016, the CCCPIR Program remains one of the most successful and productive in Vanuatu.  It is largely due to the excellent ongoing cooperation among SPC, GIZ, the Government of Vanuatu and a range of other agencies that this program serves as a model climate change initiative that flexibly and responsively meets Vanuatu’s national priorities, needs and gaps and shares and disseminates best practices across the Pacific. Gender issues are considered in all areas of planning and implementation. CCCPIR builds on, complements and closely collaborates with existing and proposed initiatives at the regional and national levels. 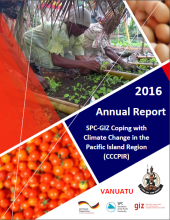