The Vanuatu’s Inventory for Greenhouse Gases has been calculated for the base year 2000 using the revised 1996 IPCC Guidelines for National Greenhouse Gas Inventories. The UNFCCC software “Non Annex1 National Greenhouse Gas Inventory Software, Version 1.3.3” has been used for the estimation of GHG. Sectoral data for GHG estimation was compiled from various sources primarily using national data collected from annual reports, statistical reports, studies and brochures of related department/ institutions. In year 2000, the total GHG emissions by sources and removals by sink for Vanuatu was 585.39Gg CO2eq (excluding removals); which comprises of 70.34Gg CO2e from Energy; 502.83Gg CO2e from Agriculture and 12.21Gg CO2e from Waste Sector. Emissions from per fluorocarbons (PFCs), hydro fluorocarbons (HFCs) and sulphur hexafluoride (SF6) in Vanuatu are negligible, as the products containing these gases are not produced in the country. CO2 sequestration by the forestry and land use sector in year 2000 amounted to 7,913.16Gg CO2e. Total GHG emissions, including FOLU, are estimated to be (-) 7327.77Gg CO2e, indicating that Vanuatu is a net sinks for GHG emissions.

In 2000, Vanuatu emitted 69.16Gg CO2e which is a 26% increase since the first inventory, which was published in 1999 and covered emissions for base year 1994. The energy sector is the main source of CO2 emissions and mainly due to combustion of fossil fuel. Net CH4 emissions in Vanuatu are estimated to be 15.85Gg and have increased by 43.1% from the year 1994 mainly due to increased livestock farming and improper waste management. Net N2O emissions in Vanuatu are estimated to be 0.58Gg which translates to 31% of total GHG emissions in 2000 mainly from agriculture sector. Emissions from the AFOLU sector, per-fluorocarbons (PFCs), hydro-fluorocarbons (HFCs) and Sulphur hexafluoride (SF6) were not considered in the 2000 GHG inventory. 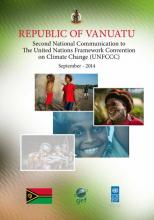