TANNA ASH FALL RESPONSE TO COMPLETE ON MAY 21: TAFEA SG 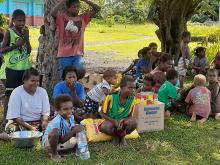 The National Emergency Operation Center (NEOC) at the National Disaster Management Office (NDMO) has received confirmation from Tafea Province that the current response to the Tanna Ash Fall victims will end on May 21, 2020.

The Secretary General (SG) for Tafea Province Joe Iautim relayed this information to the NEOC at NDMO on Friday last week.

According to the SG, distribution in Tanna is done in three zones, zone 1 being the most affected areas, which covers areas in North East Tanna, where the Yasur volcano is located.

Mr. Iautim stated next for distribution is zone 2, which covers areas in South East Tanna, from Suplhur Bay to Isaka and Imaio.

The last areas to cover are areas under Zone 3, which is the Eastern part of Central Tanna mostly along the coast, which according to assessment reports were also affected.

The distribution for these areas will begin early this week according to the current distribution plan put together by the Provincial Emergency Operation Centre (PDOC) in Tanna.

“Distribution for zone 2 areas begin this week and for zone 3 will take few more days to complete,” he said.

According to the SG, the current stock in Tanna is enough to complete the current distribution plan for the remaining affected zones.

“Our calculations indicates there is enough stock to share to the affected areas in the remaining zones 2 and 3, and left overs can be used for the second push of food supplies if communities need further assistance from the province,” he said.

Mr. Iautim assured all those affected by the Ash Fall and those covered under assessments conducted by NDMO that assistance will cover their areas in the coming days. 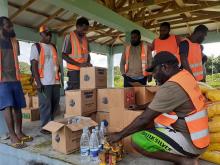