The topographic and bathymetric LiDAR survey for Vanuatu was developed by the PACCSAP program in collaboration with the NAB. It included high priority areas of Efate, Malekula and Espiritu Santo, as well as some of the smaller islands nearby. Airborne surveys flown between September and November 2012 captured the data for Efate and Malekula Islands. The survey for Espiritu Santo, which was initially delayed due to poor weather conditions, was completed in May 2013.

The link below will provide you with access to high resolution LiDAR imagery. The Vanuatu Globe was previously also accessible via the 2D Google Maps Engine, however Google has now discontinued this service.

For more information on accessing the LiDAR data, please contact Brian Phillips at the Vanuatu Meteorology and Geo-Hazards Department, piccap@vanuatu.com.vu.

2.       Download the Vanuatu Globe kml file by clicking here. The file is attached on this page which can be downloaded directly.  If you cannot access this file, email riaken@meteo.gov.vu

5.       When the Vanuatu Globe opens you will see the Globe added under your Layers panel in Google Earth (bottom left of Google Earth screen) where you can turn layers on and off. 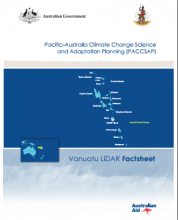