The role that natural ecosystems, especially marine ecosystems, play in human wellbeing is often overlooked or taken for granted. The benefits humans receive from ecosystems, called ecosystem services, are often hidden because markets do not directly reveal their value – nature provides these benefits for free. Failure to recognize the role that marine ecosystems play in supporting livelihoods, economic activity, and human wellbeing has, in many instances, led to inequitable and unsustainable resource management decisions.

Coastal and marine resources provide Ni-Vanuatu businesses, households, and government many real and measurable benefits. The exclusive economic zone of Vanuatu, nearly 700,000 square kilometers of ocean, is more than 50 times larger than the country’s land area. This report, describes, quantifies and, where sufficient data is available, estimates the economic value of many of Vanuatu’s marine and coastal ecosystem services, in an effort to inform sustainable and equitable management decisions and support national marine spatial planning.

Seven key marine ecosystem services were evaluated in detail: subsistence and commercial fishing, tourism, coastal protection, carbon sequestration, minerals and mining, and marine research and management. Other services are explored as well, including cultural and traditional values associated with the sea, potential future industries and other human benefits that have not yet been developed or analysed. A scarcity of data about many of these ecosystem services prevents calculation of the total economic value, so the values below should be regarded as minimum estimates. Data gaps are described in detail in the full report.

Small-scale inshore fishing and gleaning for home consumption and sale at local markets provides food security and incomes for many Ni-Vanuatu households. The subsistence and inshore commercial fisheries depend upon the health and productivity of reef, lagoon, and mangrove areas.

The economic value of Vanuatu’s inshore subsistence fisheries is about VT 520 to 635 million per year. This value estimate reflects an average annual harvest of between 400kg and 1,100kg of fish and invertebrates per square kilometer of inshore habitat and accrues to an estimated 15,500 households.  Over-harvesting of crabs and reef fish in more heavily populated areas could threaten the sustainability of this ecosystem service.

All of these sectors provide income to small-scale fishers in rural and urban Vanuatu, although most of the value of trochus, aquarium products and BdM accrues to foreign exporters. Costs are high for aquarium trade and BdM sectors so net benefits are lower. Management plans for BdM and trochushave been improved over the past 20 years; if enforced, these plans should enable sustainability. Not much is known about the sustainability of the aquarium trade.

All large-scale commercial tuna fishing in Vanuatu waters is conducted by foreign fishing vessels, mostly from China, Fiji, and Taiwan. Albacore is the dominant commercial tuna species caught in Vanuatu, making up more than 50% of the annual catch, followed by Yellowtail, Skipjack, and Bigeye. Scientists report that Yellowfin stocks show signs of overfishing and Bigeye stocks are becoming dangerously small (both are caught within Vanuatu albeit in lower numbers than Albacore); advice is that Albacore and Skipjack stocks remain healthy. Albacore fishing, mostly done by long-line method, is likely to remain sustainable as long as costs-to-returns ratios remain high enough to limit fishing effort; subsidized foreign fishing fleets could threaten this. Although the long-line method is relatively sustainable for Albacore fishing, by-catch of sharks and other pelagic species such as moonfish and marlin is substantial.

The average gross value of the tuna catch for the past 10 years is US$28 million (VT 2.5 billion), although there is significant annual variation around this average. Since catches are off-loaded in processing facilities in regional island countries or trans-shipped to distant markets thepositive economic impact of the industry for Vanuatu is mainly from licensing of foreign fishing vessels. Government revenues of at least US$1.36 million per year (VT 121million) are generated from license fees.  In addition, Vanuatu receives payments from the Government of the USA and the USA tuna industry for fishing access given to US purse seiners. These payments come under the terms of the US multilateral tuna treaty and represented a value of approximately US$ 250,000 in 2006.

Most of the economic benefits go to foreign fishing fleets, although the industry provides some employment on fishing vessels (about 175 persons). The net benefits to fishing fleets are a fraction of the gross value due to high costs of the long-line fishing method. No Ni-Vanuatu boats, canneries or sophisticated processing facilities exist in Vanuatu, so Vanuatu does not capture much of the value-added benefit. One sushi export company (Japanese) is currently operating, but the economic benefits could not be estimated due to insufficient data.

Blue Marlin and other game fish attract recreational sport fishers to Vanuatu. Recreational fishing guides and charter companies are based mainly in Efate and Santo.  Companies reported about 13,000 passengers in 2012, catching an estimated 70 tonnes of game fish. The net revenue received by fishing companies was about VT 129 million; the representative market value of fish caught is approximatelyVT 16 million.  The sustainability of this industry is unknown and warrants additional study.

Some extraction of coastal aggregate (sand, gravel, rock and shell) is observed close to Port Vila. The principal users are government and the private sector for construction, road building, making cement blocks and for seawall construction.  The household sector alsouses a significant amount of sand and gravel for landscaping. Volumes of approximately 15,000 m3wereauthorisedfor extraction in 2013 producing revenue of VT 320,000for the government from fees. The net producer benefitof sand mining in 2013 is approximately VT 15.1 million. The negative impacts of dredging and beach mining could not be assessed by this research. Probable impacts include beach erosion and destruction and siltation of reef and lagoon habitat, which may harm Vanuatu’s largest marine ecosystem services: inshore fisheries and tourism. The impacts of beach mining and lagoon dredging to inshore fisheries and tourism are potentially significant and warrant further assessment.

Exploration for deep-sea mining opportunities is already providing benefits to Vanuatu government from various fees.Currently 102 prospecting licences are active and 44 prospecting licences are pending renewal from two prospecting companies.  Because these licenses are confidential, the economic benefits could not be quantified. Any benefits to Ni-Vanuatu households or the general economy will depend upon royalty agreements and benefit sharing legislated by the Vanuatu Deep Sea Minerals Policy, in draft at time of writing. The magnitude of threats to offshore fishing and dive tourism cannot yet be quantified, but must be considered. Tourism and tuna industries provide substantial sustainable benefits to Vanuatu and may be impacted by deep-sea mining.

Healthy marine and coastal ecosystems support a lucrative tourism industry that includes diving, fishing, and other water sports. Marine and coastal ecosystems contribute VT 613 – 1,095 million from tourism in net economic benefit to Vanuatu each year.  The majority of these benefits are from dive and snorkel tourism. In magnitude, the net benefits from tourism are second only to coastal protection (below). Tourism benefits a variety of businesses and their employees and provides government tax revenue. Tourism can be a sustainable ecosystem service if managed and regulated. Mining and fishing, particularly destructive types of inshore fishing, could negatively impact tourism benefits.

Fringing reefs, mangroves and seagrasses protect Vanuatu’s coasts from erosion and flooding. The avoided costs method is used to analyze their value. Because many of the commercial and residential properties in Vanuatu are near the coast, protection from flood and erosion damage from healthy coral reefs could be quite significant, worth from VT 1.2 to 2 billion annually. Vanuatu’s mangroves and seagrasses also provide carbon sequestration benefits to the world, worth up toVT450 million per year. If protected, areas of mangroves and seagrass at risk for destruction could be marketed and sold as carbon offsets, but the market price might be low and the costs of verifying and managing the protected areas would need to be assessed on a case-by-case basis.

Other marine and coastal ecosystem services include cultural identity,handicrafts, bioremediation and aesthetic beauty. These services have not been quantified by this study because of a lack of data, but they indeed provide benefits to Vanuatu citizens and the rest of the world.

The sum value of marine and coastal ecosystem services assessed in Vanuatu are estimated to range from VT 3,325 to VT 5,405 million per year (US$ 37.4 to US$ 60.8 million).The majority of Vanuatu’s marine ecosystem service benefits come from subsistence and small-scale commercial fishing, tourism, and protection from erosion and flooding (avoided costs).The value of coastal protection accrues to owners of coastal businesses; carbon sequestration provides global benefits, albeit with no related economic activity within Vanuatu.

MACBIO’s formal link with the Vanuatu government is through the Department of Environment, but from the onset the project has made an effort to support and assist all Departments relevant to marine and coastal resource use and management. The Fisheries Division, in particular, is responsible for oversight of many key marine ecosystem services, and was instrumental in deriving the values above. Throughout this research, the authors endeavored to share information about the economic value of marine ecosystems with all the Departments that have a role in marine resource use and management. These discussions indicated an awareness and understanding that economic valuation information can inform development policy, legislation, and regulation of marine activities.

This study is a step towards a national process of recognizing the human benefits of natural ecosystems, which will lead to more equitable and sustainable management of Vanuatu’s marine assets. These results can serve as an inventory of current information about the economic value of Vanuatu’s marine and coastal assets and as a starting point for more in-depth valuations of each of the ecosystem services discussed above. More generally, Vanuatu should consider making steps towards accounting for natural capital in order to ensure the sustainable prosperity of the country.

Acknowledgements:  This brochure was prepared by the Marine and Coastal Biodiversity Management in Pacific Island Countries (MACBIO) project which is funded by the German Federal Ministry for the Environment, Nature Conservation, Building and Nuclear Safety (BMUB).   The project is being implemented by the German Agency for International Development (GIZ) with the countries of Fiji, Kiribati, Solomon Islands, Tonga and Vanuatu.  It has technical support from the Oceania Office of the International Union for the Conservation of Nature (IUCN) and is working in close collaboration with the Pacific Regional Environment Program (SPREP).

[1]Different beneficiaries (local, foreign, producer, consumer, government) are included in the value estimates; read beneficiaries column for explanation and exceptions. Gross values do not reflect costs.An exchange rate of Vt 89 to US$ 1 is used throughout the report.

[3]Sustainability refers to whether the values presented can be expected to decrease (unsustainable), increase, or stay the same (sustainable) with current human behaviours. 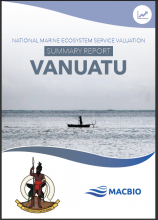