REPORT: Melanesia’s Ocean Worth Half a Trillion USD but Under Pressure

Suva, Fiji  – A major new report, Reviving Melanesia’s Ocean Economy: The Case for Action, launched today, has revealed that the ocean is a much larger part of Melanesia’s economy and future prosperity than previously understood.

Melanesia is a large sub-region in the Pacific that extends from the western end of the Pacific Ocean to the Arafura Sea, and eastward to Fiji. The region includes Fiji, New Caledonia, Papua New Guinea, the Solomon Islands, and Vanuatu.

If the ocean in Melanesia were its own economy, the new analysis finds that it would be the third largest in the region, generating about as much annual economic output as Fiji and Solomon Islands combined.  The report also describes the mounting pressures on the region’s ocean assets from resource exploitation and climate change, and the serious consequences of degradation, including challenges in providing sufficient food and livelihoods for rapidly-growing populations.

WWF’s Pacific Representative, Kesaia Tabunakawai, said, “This new analysis adds considerable weight to the case for ocean conservation to be an even higher priority for Melanesian leaders. We have seen good commitments in the past but the objective analysis shows that we are running out of time and need action at a much greater scale and urgency if Melanesia is to have a healthy and prosperous future.”

The report shows that marine fisheries represent more than half of the annual ocean-based economic output of Melanesia, and 70 per cent of all coastal fisheries production in the Pacific islands is for subsistence use. With current population growth projections, 60 per cent more fish will be needed to feed local populations by 2030.

Professor Ove Hoegh-Guldberg, from the Global Change Institute, University of Queensland, and lead author of the report, said, “We can now see in no uncertain terms just how much the people of Melanesia rely on the ocean. There is no doubt the ocean has delivered the majority of food, livelihoods and economic activity for Melanesia for a very long time. Given some of the troubling trends in the status of the ecosystems that generate these benefits, however, the question is now: how long will these benefits last?”

The report sets out a clear set of measures that Pacific leaders and international partners can adopt to translate commitments into scaled-up action to protect the region’s natural coastal and ocean assets, and secure food, livelihoods and the regional economy.

BCG Partner and Managing Director, Marty Smits, said, “With this analysis, no one can be in any doubt about the importance of carefully managing the ocean assets that underpin so much of the Melanesian economy. A prudent economic approach would see strong conservation actions rolled out across Melanesia to secure its natural assets, otherwise the region’s economic foundations could seriously be threatened.”

Global Oceans leader for WWF, John Tanzer, said, “While we see ocean ecosystems like coral reefs, mangroves and fisheries coming under immense pressure around the world and in important regions like Melanesia, we also see unprecedented focus on the ocean. Leaders in Melanesia and beyond can seize this moment to make good on commitments including around the UN Sustainable Development Goals and the global climate agreement of 2015. There is no time to lose.” 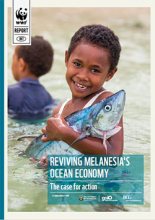