As of the 2009 Census, the total population on the island of Santo was 39,606 people. Santo is the second highest populated island in Vanuatu, second only to Efate. Luganville, with a population of 13,167 is the second largest town in Vanuatu and is located on the southern coast of the island, approximately a 1.5 hour drive from the project site. According to the 2009 Census, the annual population growth rate for Santo is 2.4%.

As the largest island in Vanuatu, Santo has an extensive mountain range along its southern & western coasts with many large rivers and creeks extending into the uplands. The eastern coast is relatively flat in comparison and is primarily used for agricultural purposes. A large natural harbor is present in the north called Big Bay, where a significant portion of the island’s population is
located. The interior of the island is inaccessible and populated sparsely by tribes of Ni-Vanuatu living traditional subsistence agrarian lifestyles, many of whom do not speak Bislama or wear Western clothing. A majority of the offshore islands in Sanma Province are located off of the southeast corner of Santo.

There is substantial road access throughout the vast island of Santo, although there are many areas where road access is poor or there is no road access whatsoever and where communities rely only on footpaths or boats for transportation. The road from Luganville to Port Olry, which spans the eastern coast of Santo, is in excellent condition with tar-sealed bitumen and drainage provided through funding from the US government through the Millenium Challenge Corporation and was recently completed in 2011. The wide roads in the main town of Luganville are in good condition despite the need for minor repairs in certain areas and were originally built by the American armed forces during World War II when Santo served as a base for American troops.

The road that proceeds in a westward direction from Luganville to Tasariki along the southern coast of Santo is regularly maintained by the PWD, although these roads are frequently impassable after heavy rains due to due to damaged bridges or a lack of resilient infrastructure to allow passage over the numerous wide river crossings. Several bridges have collapsed along South Santo’s road in the past. The Chinese government has indicated an interest in providing support to the Vanuatu government by possibly funding the construction of bridges along this stretch of road according to the Sanma PWD who has assisted with creating the plans for this work. The conditions of this road deteriorate drastically proceeding further West until the road’s end at Tassariki. 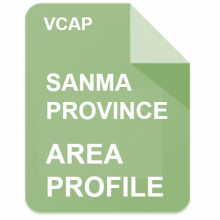