Torba is the most northern and isolated province in Vanuatu. The province has an estimated population of 9,359 people and a land-area of 882 km². Its capital is Sola on the island of Vanua Lava. There are two groups of islands in Torba Province, which are the Banks Group and Torres Groups.

Torba is the perhaps the least developed province in Vanuatu. Transport is irregular and difficult. Communication is challenging. Infrastructure is limited on most islands with a few roads and vehicles present on Vanua Lava, Gaua & Mota Lava. Air Vanuatu provides regular service to Vanua Lava, Mota Lava, Gaua & Loh Island in the Torres Group. Small “banana boats” are relied upon heavily, despite frequent rough seas, to access remaining communities. The difficulty and infrequent level of transport in Torba Province has resulted in a much higher pricing for locals when they purchase commonly used goods and supplies such as fuel and tinned foods.

A missionary doctor, who is also a pilot, lives on the island of Gaua and makes routine visits to the islands in the Banks and Torres groups and transports patients to health facilities in Luganville, Santo and Port Vila, Efate as necessary. Additional landing strips for his small plane have been created on some additional islands as well in Torba Province as well but these are not serviced by Air Vanuatu.

The Banks Group consists of the 9 populated islands. The largest populations are located on the islands of Vanua Lava with 2,597 people, Gaua with 2,941 & Mota Lava with 1,491 according to the 2009 census. The island of Gaua is an agricultural base of the region with the largest land area in the group. Gaua is also home to an active volcano that has displaced several communities within the past decade. Vanua Lava is the second largest island and has very mountainous terrain with many rivers and creeks surrounding the island. Salt-water crocodiles were introduced by a travelling missionary to Vanua Lava many years ago and the Torba Provincial Government Council has protected this invasive species to date even though there have been several reported crocodile attacks on local women (resulting in injury rather than death). Coastal resources in the Banks Group are very rich with mainly subsistance fishing activities being practiced by locals.

The Torres Group, consisting of 5 populated islands, is a smaller, flatter series of islands than the Banks Group and they are distributed over a shorter distance. The Torres islands are located at the extreme northwest corner of province, isolated from Vanuatu’s shipping routes. Receiving an abundance of precipitation, the temperature on the island varies during the hot and cold seasons. The average temperature is approximately 24.9°C at the coast and is a few degrees cooler in the centre of the islands. Weather in the Torres is seasonal, and warmer from November until April and the cooler and dryer period typically from May to October. Like the rest of Vanuatu, the island’s weather is strongly influenced by the El Nino Southern Oscillation cycles. During the El Nino (warm phase), the country is subject to long, dry spells. During the La Nina (cool phase), Vanuatu has prolonged wet conditions.

Torba Province is generally quite self-reliant and many households continue to live a traditional lifestyle where they produce a majority of their own goods such as locally made soap, salt and cooking oil. Income generation is a particular challenge in the Torres as the island group is located in such a remote area without easy access to large markets. The target communities in the Torres indicated during V-CAP consultations that they generate a majority of their household income through the sale of coconut crabs and lobster, kava, copra and agricultural produce. 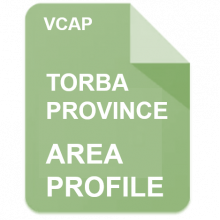