The purpose of the directory is to help connect climate finance with those who need it. Climate finance refers to financing channelled by national, regional, and international entities for climate change mitigation and adaptation.

Vanuatu, among the world’s most vulnerable countries to climate change and disasters, has a significant and immediate need for investment in climate change mitigation and adaptation. The amount of climate finance approved and disbursed to date fulfils only a small portion of actual needs. A study carried out by the Stockholm Environment Institute revealed that Vanuatu had received roughly USD 49.4 million of climate finance from 2010-2014, with the majority (57.2%) supporting mitigation activities.[1]

This directory is divided into five sections:

[2] Small is defined as equal to or less than VUV 15 million. 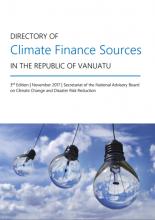