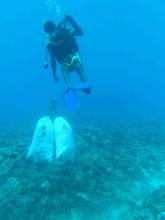 We concentrated on the area found last week between Paul's Rock and the coastline, between 8 - 15 m depths, and up to 150 m offshore.  We found some aggregations where they were really thick on the ground, with many in hiding during daylight hours under shelves  or plate corals.

Our radius at this second anchorage extended out 150 metres  and it could be seen the Frontal Line had moved further Northeast    and in 15 m depths could  in fact be closer to Mangaliliu Village than we previously thought, even though snorkelling on the fringing reefs out from the Survivor Beaches shows no sign of COTs as yet.

Next Sunday, we shall move our anchorage further NorEast to better define the Frontal Line  and then work back from there to SouthWest.

Any volunteers are welcome to join us.  We look to be making a difference, but realise the effort must be continued well into the future, to be effective.

Interestingly, Big Blue Dive have noticed that in areas of Mele Bay which had heavy concentrations of COTs say 2 years ago, that there is now an increase in opportunistic Drupella sea-snails which move in  after a COTs outbreak and mop up any remaining live corals.    In the past 30 years, we have never had a problem with  snails on Vanuatu reefs, although on the GBR   Drupella snails had been a big concern to Reef Check  (& possibly still are?)

We are still not sure what chemical would be most cost effective to kill spawn-water collected in the bilge of the dinghy, but expect Ammonia or Bleach would be suitable as it can be injected into COTs  to kill them,  and the NH3  is environmentally friendly, breaking down into salts in seawater.